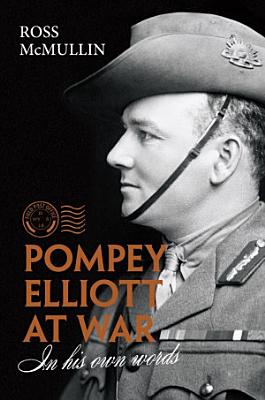 Hundreds of Australian first-person narratives of World War I have been published, but none more riveting than this one. The wartime letters and diaries of Pompey Elliott, Australia’s most famous fighting general, are exceptionally forthright. They are also remarkably illuminating about his volatile emotions. Pompey not only wrote frankly about what happened to him and the men he was commanding; he was also frank about what he felt about both. Having arranged a no-secrets pact with his wife for their correspondence before he left Australia in 1914, he adhered to that agreement throughout the conflict. Moreover, Pompey expressed himself with vivid candour in his diaries and other correspondence. He wrote rapidly and fluently, with fertile imagery, a flair for simile, and an engaging turn of phrase. His extraordinary letters to his young children turned even the Western Front into a bedtime story. Pompey was prominent in iconic battles and numerous controversies. He was wounded at the Gallipoli landing, and four of his men were awarded the Victoria Cross for conspicuous bravery at Lone Pine. No one was more instrumental than Pompey in turning looming defeat into stunning victory at both Polygon Wood and Villers–Bretonneux. No Australian general was more revered by those he led or more famous outside his own command. Ross McMullin, the author of the award-winning and best-selling biography Pompey Elliott, has collected Pompey’s words from a variety of sources and shaped them into a compelling narrative. This book will transform our awareness of Pompey's importance in the dramatic final year of World War I.

Authors: Ross McMullin
Categories: Biography & Autobiography
Hundreds of Australian first-person narratives of World War I have been published, but none more riveting than this one. The wartime letters and diaries of Pomp

Authors: Ross McMullin
Categories: Biography & Autobiography
Hundreds of Australian first-person narratives of World War I have been published, but none more riveting than this one. The wartime letters and diaries of Pomp

Museums, History and the Intimate Experience of the Great War

Authors: Joy Damousi
Categories: History
The Great War of 1914-1918 was fought on the battlefield, on the sea and in the air, and in the heart. Museums Victoria’s exhibition World War I: Love and Sor

Authors: Peter Edgar
Categories: History
The brutal 1914 German invasion of Belgium and France had gained a large portion of both countries. Over three-and-a-half punishing years the Allies were slowly

Hell of a Time

Authors: Michael McKernan
Categories: History
An absorbing examination of what it was like to wait and to worry on the homefront during the years of the loved ones' captivity. It deals with a world that mil

Authors: Michael McKernan
Categories: History
During the First World War, in Melbourne and communities throughout Victoria, schoolchildren knitted socks for the troops serving in Gallipoli, the Middle East

Authors: Ross McMullin
Categories: Biography & Autobiography
An analysis of the individuals making up the lost generation of WWI. They involve a range of backgrounds and experiences, all states and classes, and come from

Authors: Ross McMullin
Categories: Biography & Autobiography
"Pompey Elliott was a remarkable Australian. During the Great War he was a charismatic, controversial, and outstandingly successful military leader. An accompli

Life So Full of Promise