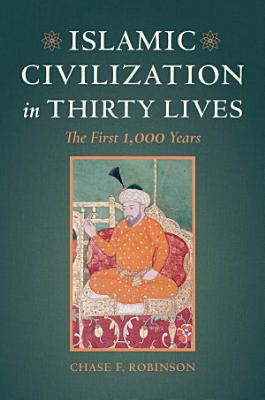 Religious thinkers, political leaders, lawmakers, writers, and philosophers have shaped the 1,400-year-long development of the world's second-largest religion. But who were these people? What do we know of their lives and the ways in which they influenced their societies? In Islamic Civilization in Thirty Lives, the distinguished historian of Islam Chase F. Robinson draws on the long tradition in Muslim scholarship of commemorating in writing the biographies of notable figures, but he weaves these ambitious lives together to create a rich narrative of Islamic civilization, from the Prophet Muhammad in the seventh century to the era of the world conquerer Timur and the Ottoman Sultan Mehmed II in the fifteenth. Beginning in Islam’s heartland, Mecca, and ranging from North Africa and Iberia in the west to Central and East Asia, Robinson not only traces the rise and fall of Islamic states through the biographies of political and military leaders who worked to secure peace or expand their power, but also discusses those who developed Islamic law, scientific thought, and literature. What emerges is a fascinating portrait of rich and diverse Islamic societies. Alongside the famous characters who colored this landscape—including Muhammad’s cousin ’Ali; the Crusader-era hero Saladin; and the poet Rumi—are less well-known figures, such as Ibn Fadlan, whose travels in Eurasia brought fascinating first-hand accounts of the Volga Vikings to the Abbasid Caliph; the eleventh-century Karima al-Marwaziyya, a woman scholar of Prophetic traditions; and Abu al-Qasim Ramisht, a twelfth-century merchant millionaire. An illuminating read for anyone interested in learning more about this often-misunderstood civilization, this book creates a vivid picture of life in all arenas of the pre-modern Muslim world.

Authors: Mohamad El-Merheb
Categories: History
This volume offers a collection of new concepts and approaches to the study of the professional mobility of the literati and scholars (ʿulamāʾ) in pre-modern

Authors: Ayman S. Ibrahim
Categories: Religion
Why did non-Muslims convert to Islam during Muhammad's life and under his immediate successors? How did Muslim historians portray these conversions? Why did the

A History of Islam in 21 Women

Authors: Hossein Kamaly
Categories: Religion
Khadija was the first believer, to whom the Prophet Muhammad often turned for advice. At a time when strongmen quickly seized power from any female Muslim ruler

Authors: Baris Cayli
Categories: History
How do militants rationalize violence and what are their motives? How do time and space shape their destiny? In Violence and Militants Baris Cayli explores thes

Authors: Youshaa Patel
Categories:
A sweeping history of Muslim identity from its origins in late antiquity to the present How did Muslims across time and place define the line between themselves

Authors: Julian Reynolds
Categories: History
This book is the author’s second published by Xlibris, the first being Defending Rome: The Masters of the Soldiers, published in 2011. It explores the consequ

The Maghrib in the Mashriq

Authors: Maribel Fierro
Categories: Religion
This is a pioneering book about the impact that knowledge produced in the Maghrib (Islamic North Africa and al-Andalus = Muslim Iberia) had on the rest of the I