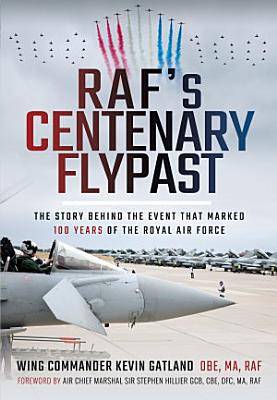 On 10 July 2018, exactly 100 years and 100 days after the formation of the world’s first independent air force, 103 aircraft of twenty-four types from twenty-five squadrons flew over London in the largest formation of military aircraft seen over the capital of the UK in nearly thirty years. Involving over 250 aircrew and operating out of fourteen military and two civilian airfields, with nineteen back-up aircraft and a standby air-to-air refueling tanker, the Royal Air Force put on a unrivaled display to mark the centenary of its creation on 1 April 1918, in the closing months of the First World War. Exemplifying that long and proud history, was the Spitfire, Hurricane, Lancaster and Dakota of the Memorial Flight, as well as the enduring Hercules, with the newly acquired F-35B Lightning displaying the RAF’s continuing global importance. This book reveals how the flypast was conceived and examines the detailed planning involved in the event, written by someone who would know – the project manager and coordinator. The composition and size of the flypast was truly momentous, comprising virtually every type of aircraft that the RAF operated at the time. As Chief of Staff at the Tornado GR4 Force Headquarters operating from RAF Marham, and an experienced Tornado GR4 Navigator, Wing Commander Kevin Gatland had the task of pulling together all the necessary components, both military and civilian required to produce an unrivaled aerial display. This involved considering the feasibility of assembling so many varied types of aircraft, all with different speeds and capabilities, in addition to concentrating them into a tight schedule to produce a virtually continuous stream of aircraft over central London, with elements breaking off to pass over the northerly runway at Heathrow Airport, the RAF Memorial at Runnymede, Windsor Castle and the RAF Museum at Hendon. Beautifully illustrated with glorious color in-flight photographs of the magnificent aircraft of the current RAF as well as the briefing and planning session, this book demonstrates the enormous range of factors that had to be taken into consideration to produce the amazing spectacle that was witnessed by the Queen from Buckingham Palace and the thousands who gathered in The Mall – an event captured in the pages of this fascinating book.

Authors: Miguel Vasconcelos
Categories: Transportation
This publication provides safety information and guidance to those involved in the certification, operation, and maintenance of high-performance former military

Authors: Ken Hickson
Categories: Business & Economics
Introducing the life and times of a legend in international aviation — Lim Chin Beng — the man they called Mr SIA. Absorbing the life and work of Lim Chin B

Authors: Nick Meikle
Categories: History
The story of one of history’s greatest fighter aircraft from WWII to its remarkable restoration in 1980 Rhodesia: “an aviation classic-in-waiting” (Airsca

Authors: Garry Campion
Categories: History
The Battle of Britain has held an enchanted place in British popular history and memory throughout the modern era. Its transition from history to heritage since

Authors: Jarrod Cotter
Categories: History
The history of the Flight began with the formation of the Historic Aircraft Flight in July 1957, it was later to become known as The Battle of Britain Memorial

The AirForces Monthly Book of the F/A-18 Hornet

Authors: Tim Senior
Categories: History
The F/A-18 Hornet has been in service over 20 years and has developed into and effective multi-role combat aircraft. With its array of weapon options the Hornet