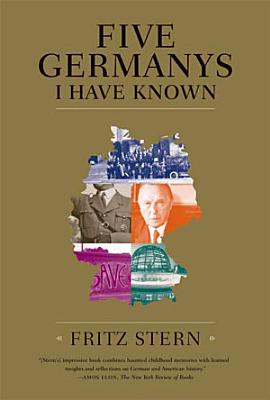 GET BOOK
Five Germanys I Have Known Book Description:

The "German question" haunts the modern world: How could so civilized a nation be responsible for the greatest horror in Western history? In this unusual fusion of personal memoir and history, the celebrated scholar Fritz Stern refracts the question through the prism of his own life. Born in the Weimar Republic, exposed to five years of National Socialism before being forced into exile in 1938 in America, he became a world-renowned historian whose work opened new perspectives on the German past. Stern brings to life the five Germanys he has experienced: Weimar, the Third Reich, postwar West and East Germanys, and the unified country after 1990. Through his engagement with the nation from which he and his family fled, he shows that the tumultuous history of Germany, alternately the strength and the scourge of Europe, offers political lessons for citizens everywhere—especially those facing or escaping from tyranny. In this wise, tough-minded, and subtle book, Stern, himself a passionately engaged citizen, looks beyond Germany to issues of political responsibility that concern everyone. Five Germanys I Have Known vindicates his belief that, at its best, history is our most dramatic introduction to a moral civic life.