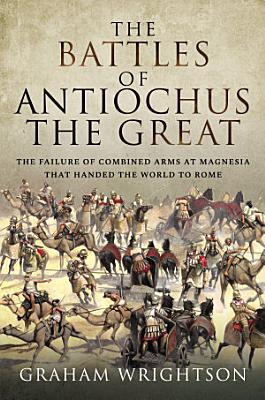 GET BOOK
The Battles of Antiochus the Great Book Description:

Antiochus III, the king of the Seleucid Empire for four decades, ruled a powerful state for a long time. He fought and won many battles from India to Egypt, and he lost almost as many. Compared with most of the other Hellenistic monarchs of Macedonian-founded kingdoms, Antiochus had a greater variety of units that he could field in his army. He was in a unique position among the other kings because he had access to the traditional infantry-based Greek cultures in Asia Minor as well as the cavalry-dominant cultures of Mesopotamia and Western Asia. Yet, despite these advantages, Antiochus repeatedly came up short on the battlefield and his tactical shortcomings were no more obviously laid bare than at the Battle of Magnesia-ad-Sipylum in 190 BC. There his huge combined army, one of the largest ever fielded by Hellenistic rulers, was soundly thrashed by the smaller Roman force. Through an analysis of the Seleucid army, the inherited standard tactics of Macedonian-style armies reliant on the sarissa phalanx, and a detailed examination of the three main battles of Antiochus III, this book will show how it was his failure to utilise combined arms at its fullest realization that led to such a world-changing defeat at Magnesia.

The Battles of Antiochus the Great

Authors: Graham Wrightson
Categories: History
Antiochus III, the king of the Seleucid Empire for four decades, ruled a powerful state for a long time. He fought and won many battles from India to Egypt, and

The Roman War of Antiochos the Great

Authors: John D. Grainger
Categories: Literary Criticism
The first detailed examination of the collison of Rome and the Seleukid kingdom which ended in the battle of Magnesia, 189 BC, provides a case study in ancient

Authors: Michael Taylor
Categories: History
A teenage king in 223 BC, Antiochus III inherited an empire in shambles, ravaged by civil strife and eroded by territorial secessions. He proved himself a true

The Seleukid Empire of Antiochus III

Authors: John D Grainger
Categories: History
The second volume in John Grainger's history of the Seleukid Empire is devoted to the reign of Antiochus III. Too often remembered only as the man who lost to t

The Cyclopaedia of Biblical Literature

The Holy Bible, in the Authorized Version